Another exciting week, you just can’t make this stuff up

Counts of Late-run Kenai kings continue to show a substantial improvement from recent record low runs. We remain ahead of pace for an in-river run of 22,500 which is a trigger in the management plan for paired sport and commercial fishery restrictions currently in place. 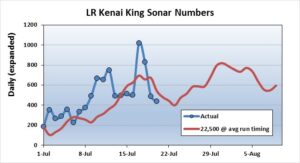 Sonar projections are currently tracking around 29,000 total run as estimated at Mile 14 at the 34% point in the normal run timing on Monday July 20. The 50% point in timing at the new sonar site is around July 28 which is 4 days later at the new sonar site at RM 14 than at the old RM 8.6 location. Note that in-river run is slightly higher than the sonar due to harvest and spawning below the new sonar.

Current trends suggest that the Kenai late run king escapement goals will readily be met and there is a fair likelihood that the in-river run will exceed 22,500 as estimated past mile 8.6.

If king counts hold, we are likely to see bait EO’d back into the sport fishery, king fishing allowed upstream of the Soldotna Bridge later this week. With this change, commercial set net EO authority will increase from 36 to 51 hours per week and king retention in the personal use fishery might also be allowed.

Once these changes, which are consistent with the Kenai River Late-Run King Salmon Management Plan, are implemented then the management objective will be to assure that more than 15,000 king salmon survive all fishing mortality to spawn. It is our assessment that with continued normal run timing the escapement should exceed 20,000. There is still some question around the quality of escapement (how many are big fish vs smaller fish which are almost exclusively males) but an escapement solidly greater than 20,000 would certainly be sustainable and should be viewed as a success in light of the solid fishing opportunity that has been experienced so far this season.

Commercial fishery harvest of late-run king salmon is still running about 4/1 greater than the sport harvest. Slightly greater numbers of larger king salmon are now showing up in the commercial catch, sport harvest survey and at the sonar at Mile 14. This is good.

One potential issue we are watching is the possibility that once we get into early August the department may have to weigh holding the Kenai sockeye sonar count down by fishing more time with the set nets than would be allowed by the management plans should the added fishing in all fisheries in late July drive the projected spawning escapement of Kenai late-run kings below 22,500. The plans say that if the spawning escapement is projected to be less than 22,500 then the set nets are allowed only a total of 36 hours in August. What we will be watching closely here is the sonar count for sockeye. We will object to any expansion of set net activity under any scenario other than the number exceeding the upper end of the Optimal Escapement Goal (1.2 million). We will keep you posted on this issue. 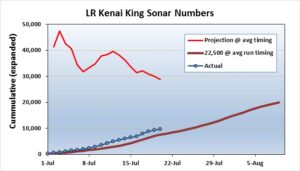 The Kenai sockeye run is late and the preseason forecast of 3.6 million is somewhat in question but a total run of around 5.0 million is very likely. Sonar counts, harvest, and offshore test fishing counts improved this week at the normal peak of the run. Today, the offshore test is observing large numbers of sockeye that are primarily of Kenai River origin. These fish should begin hitting the mouth of the river as early as Friday. We are at about the 40% point in the run. The later part of the sockeye run tends to move very quickly through the inlet and into the river.. Thus, the situation can change very quickly at this time of year. We should have much better idea of Kenai sockeye numbers by the end of the week but it is setting up for a great weekend for sport and personal use fishers. Note, expect the set net fishery to be out in force on Saturday and Sunday as well should very large numbers hit the beach. 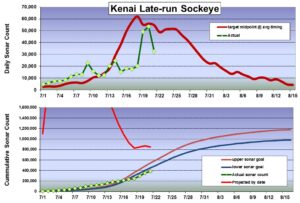 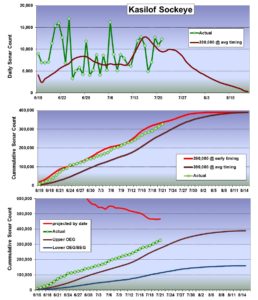 Sockeye runs got off to a strong early start in the Kasilof and have held steady. The Kenai run has been slow to develop but finally began to show this week. 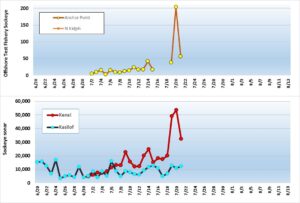 Monday’s commercial fishery produced the best catches of the year to date but numbers were still well below normal for this time of year. Drift gillnet and Kenai setnet harvest has been poor to date.

Kasilof setnet beaches have enjoyed better success with the good Kasilof sockeye run. The Kasilof setnet fishery has fished on the beach or in the special harvest area for 10 straight days without a window in response to large Kasilof sockeye escapements. On Saturday July 18, a 12 hour set net opener in the Kasilof section within 600 feet of the beach exceeded management plan limits on EO time during periods of low king abundance. This 600 ft opener was in lieu of the Kasilof special harvest area at the mouth of the river which most fishers do not like. Similar openers are occurring this week. Because Kasilof late-run king abundance is not assessed, sockeye escapement goals are driving Kasilof management.

Substantial numbers of kings have been taken in the setnet fishery in area-wide openers – 500 to 700 per day. This indicates that fair numbers of kings are moving through the inlet. Through Monday July 20 the Central District commercial set net harvest was 4,499 fish. In comparison, Kenai sportfishery harvest of late-run kings was about 1,000.