Emergency order #49, opening the east side set gillnet commercial fishery for 12 hours on Monday August 10, exceeded the 36-hour limit for this fishery specified in the Kenai late-run king plan when escapement is projected to be below 22,500.

This action was taken under provision (e) of the umbrella Upper Cook Inlet Salmon Management Plan.

This provision recognizes the commissioner’s authority to depart from other management plan provisions, where deemed necessary to achieved established escapement goals including inriver goals.

In this case, the action was taken in an attempt to limit escapement of Kenai sockeye to the specified inriver goal range of 1.0 to 1.2 million as measured at the sonar.

With a late influx of Kenai sockeye into the inlet, counts are now on track to reach approximately 1.3 million.

This is the second out-of-plan measure taken by commercial fishery managers this year based on sockeye escapements.

From July 18 through 25, EO limits of 36 hours per week specified in the Kenai late-run king management plan were exceeded in the Kasilof section of the set net fishery on five dates including a total of 88 hours for the week of July 19-25. Many of these openings were limited to within 600 ft of shore with unclear king harvest tradeoffs.

These actions were triggered by a strong Kasilof sockeye run and projected escapements over the optimum escapement goal of 160,000 to 390,000.

Over 450,000 sockeye were estimated at the Kasilof sonar through August 9 as the run is entering its final stage.

In addition, the Kasilof River special harvest area was employed nearly continuously beginning July 7 whenever the Kasilof beach was closed.

Kasilof commercial fisheries effectively prioritized established sockeye escapement goals over impacts on Kasilof kings which are not assessed but likely exceed any sustainable escapement levels that might be established.

Extending the commercial fishery in August affords the opportunity to take advantage of continuing commercial sockeye harvest opportunities which remain relatively strong for this time of year.

Total commercial sockeye harvests in drift net and east side set net fisheries has reached 2.4 million, of which over 500,000 has occurred since August 1.

Catches are falling off rapidly with only 22,000 sockeye caught in Sunday’s set net opener.

Current king numbers remain on track for a total escapement of 22,500 or less and an inriver run size of perhaps 26,000.

Sonar counts are tracking for about 23,000 to 24,000 at end of season depending on last few days of counts. Through Saturday August 8, a total of 20,436 kings were estimated to have passed the sonar.

Escapement projections are about 1,000 fish less than the sonar count, accounting for harvest above and spawning below. 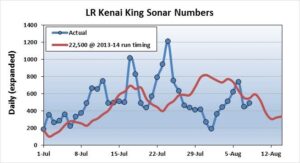 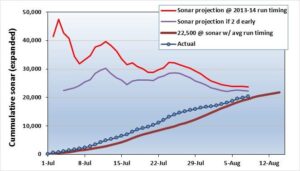 As per the management plan adopted by the 2014 Board of Fisheries, paired restrictions in the sport and commercial fisheries were in place throughout much of July based on a preseason run forecast of only 22,100.

When the inriver run is projected to be less than 22,500 kings, the king management plan limits commercial fishing time in the east side set net fishery to no more than 36 hours per week when bait is restricted in the Kenai king sport fishery.

Approaching the midpoint of the run timing on July 24, better-than-expected king counts allowed the Department to project an inriver run of over 22,500.

This allowed return to a more normal fishery regime, removing king-based set net EO limits, allowing the personal use fishery to retain kings, and reopening the river to the use of bait.

Through the later part of July, king counts fell off and run projections gradually declined. On August 1, the management plan trigger for limits on the commercial fishery changes from 22,500 inriver to 22,500 escapement.

On August 4, the ADFG projected that the final escapement of late-run king salmon in the Kenai River would be less than 22,500 fish. This triggered a 36 hour limit on commercial fishing in the set net fishery for the balance of the year. This 36 hour limit was exceeded with the 12 hour east side set net fishery on Monday August 9.

The latest out-of-plan action was taken on the basis of inriver sockeye goals which are intended to distribute escapements throughout the sustainable goal range and to share allocation of harvest among the various fisheries.

At the same time, the impact of additional commercial setnet fishing from August 9 through the end of the season on August 15 is not expected to be substantial either in terms of king interception, sockeye escapement or commercial sockeye harvest.

King catches in on the Sunday setnet opener fell to just 60. Sockeye harvests fell to just 22,000. Catch in the Kasilof section on Sunday fell below 1% of the season total – one more day below 1% triggers closure of the Kasilof set nets under the management plan.

Kenai late-run sport harvest for the year is approximately 4,100. Total east side set net harvest through Sunday was 6,941 of which the large majority are Kenai fish.