Eye on the Donut 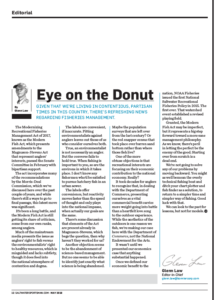 The following editorial appeared in the May 2018 issue of Saltwater Sportsman.

Given that we’re living in contentious, partisan times in this country, there’s refreshing news regarding fisheries management.

The Modernizing Recreational Fisheries Management Act of 2017, known as the Modern Fish Act, which presents amendments to the Magnuson-Stevens Act that represent anglers’ interests, passed the Senate Committee in February with bipartisan support. Read full story