On Wednesday, July 25, 647 large Kenai River king salmon were counted, 7,222 to date, for kings more than 34 inches this season. With normal timing, the run is approaching the midpoint (46 percent). The numbers are currently tracking for a normal or slightly late run timing. The first graph shows the daily run counts for Kenai kings, while the second graph shows the end of season escapement projects. 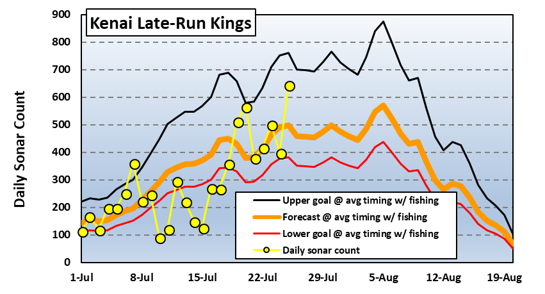 The end of season projected escapement is slightly above 15,000 large fish, which is greater than the lower goal of 13,500 large fish. The end of season projections are slowly moving up away from the lower goal as benefits from commercial and sport fishing restrictions are realized. It is a good sign sonar count projections continue to trend comfortably inside the lower end of the goal range assuming a normal run timing. 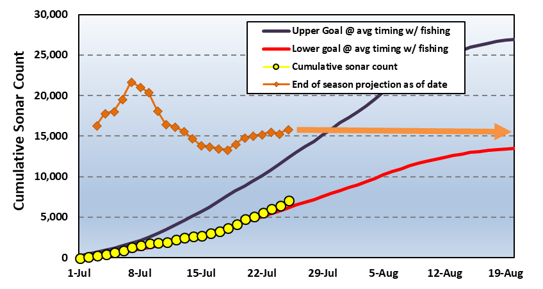 Paired sport and commercial fishery restrictions, defined in the management plan for low King runs, have been critical to protecting escapement this year. On Monday’s commercial fishery opener, 246 kings were harvested in the Kenai area set nets, with estimates from ADFG that about half were large Kenai kings (greater than 34 inches). In that one 12 hour opener, the Kenai set nets, which have fished the least amount of time of any area commercial gear group to date, harvested more large Kenai kings than large kings harvested by anglers, through the first half of July when retention was allowed.

All user groups are facing one of the most challenging fishing seasons on record.