In one of the worst fishery seasons ever on the Kenai River, with closures and restrictions in commercial, sport and personal use fisheries for king and sockeye salmon, the Governor comes to Kenai on Friday, July 27 to listen to complaints from commercial fishermen that it is unfair to say that commercial fisheries have been the primary harvester of Kenai kings this year. The Governor has no plans to meet with sport fish or personal use interests.

On Thursday, July 26 ADFG sport fish announced the early closure of the Kenai River personal use fishery that targets sockeye salmon, and a reduction in the daily bag limit for sport anglers from 3 to 1 for Kenai River sockeye, effective Monday, July 30. ADFG commercial fisheries in the Upper Cook Inlet (UCI) Central District (Kasilof and Kenai sections) through Wednesday, July 25 had harvested 664,257 sockeye (Table 1). Kenai River sockeye counts as of that date was 367,895, with an end of season projection of nearly 300,000 less than the lower escapement goal of 900,000.

To date, out of the 2,572 kings bound for the Kasilof and Kenai Rivers and harvested in commercial fisheries, no one knows how many were Kenai kings greater than 34 inches, but the historical average has been about 40 percent. This year that percentage is likely to be less than that, as the sport fish harvest percentage of large kings vs. all kings on the Kenai River is about 17 percent. 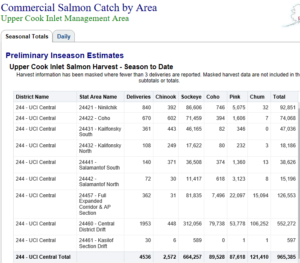 Data from the daily total of the commercial fishery opener on Monday, July 23 does provide some limited information, albeit for that day. 246 kings were caught by set nets in the Kenai section (K-Beach North, Salamatof South, Salamatof North), meaning that these kings were most likely heading to the Kenai River. Preliminary estimates by ADFG indicate about half of that total were larger than 34 inches. Meaning in that one 12-hour opener, approximately 126 Kenai bound large kings were harvested in just the Kenai section by set nets.

One hopes that this information is presented to the Governor as he talks to commercial fishermen.