Kenai sockeye counts continue to lag with just 516,562 counted thru Friday August 3. At the normal 86 percent point in run timing, it is now unlikely that the minimum inriver goal of 900,000 will be reached. 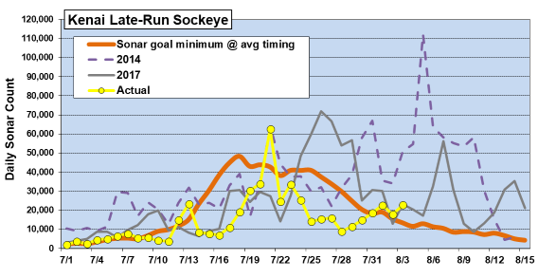 Current mathematical projections are for a final sonar count of around 600,000. With the fisheries closed to protect Kenai sockeye, sonar counts and projections are gradually creeping upward. It is hard to believe there will not be at least a small pulse of late fish, so a final number between 600,000 and 700,000 is most likely. 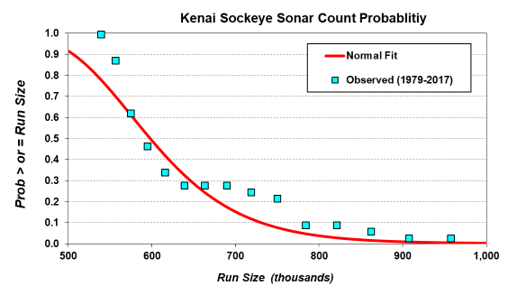 At this point in the run, it is increasing difficult to get accurate sockeye sonar counts as pink salmon begin to flood the system. Attempts are made to apportion the sonar counts by species based on fish sampling at the sonar. However, corrections may be subject to significant error. For instance, species apportionment errors led to the previous retirement of the Susitna sonar as an index of sockeye escapement. 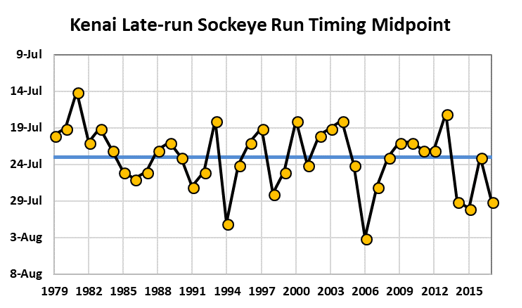 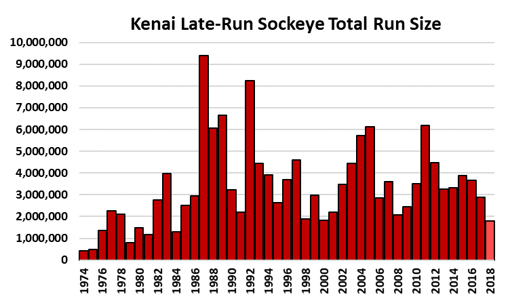 A total of 328,996 sockeye have been counted at the Kasilof sonar through Friday. At the normal 94 percent point in the run timing, current numbers project to an escapement of around 350,000. With the commercial fishery closed to protect Kenai sockeye, Kasilof numbers and projections are still trending upward. One can expect final numbers to be above the upper escapement goal of 340,000 and around the upper end of the optimal escapement goal of 390,000.