Solid sonar counts this week are a substantial improvement over record low numbers seen in the last three years.

Over 11,000 late run kings have been estimated to pass the new river mile 14 sonar through Wednesday July 22 as we approach the recent 40% point in run timing at this site. 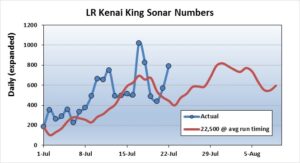 Projections consistent with ADF&G’s in-season model are for an in-river run of 32,000, a sonar estimate of 30,000, and an escapement of 29,600. Confidence in these projections has stabilized over the last week. 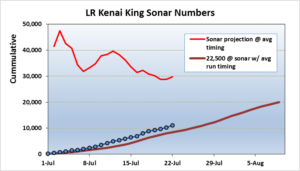 The total return of perhaps 35,000 late‑run Kenai kings to upper Cook Inlet will be substantially greater than the pre-season forecast of 22,115.

These numbers are the basis for the Department’s relaxing regulations in all fisheries adopted earlier this year to protect king escapements during the recent period of low abundance.

There is now strong confidence that escapements in the Kenai will be in the upper half of the sustainable 15,000 to 30,000 escapement goal range even with higher harvest in commercial, personal use and sport fisheries and even if run timing is one or two days earlier than ADF&G’s models assume (as we suspect).

While many of us might have preferred to see a more conservative management approach to improving king numbers, current fishery liberalizations are as specified in the Kenai River Late-Run King Salmon Management Plan as revised by the 2014 Board of Fisheries with great deliberation.

The management plan allows for prohibition of bait in the sport fishery, prohibition of king retention in the personal use fishery, and no more than 36 hours per week in the east side setnet commercial fishery from July 1 through July 31 when the in-river late-run king projection is less than 22,500.

With in-river run projections confidently over 22,500, the current plan identifies no basis for continuing restrictive management measures in place since the beginning of the season.

Conservation measures enacted under the current king management plan have proven again this year to be very effective in ensuring adequate king escapement in the face of uncertain run strength while also continuing to provide substantial opportunity in sport, personal use and commercial fisheries.