On Friday, July 27, 426 large Kenai River king salmon were counted, 8,101 to date, for kings more than 34 inches this season. The run is now at the normal halfway point, and the end of season escapement projection is around 16,000 and continues to slowly increase as commercial interception has ceased. Figure 1 shows the daily run counts for Kenai kings, while figure 2 shows the end of season escapement projects. 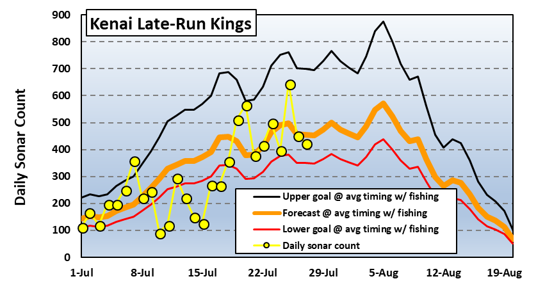 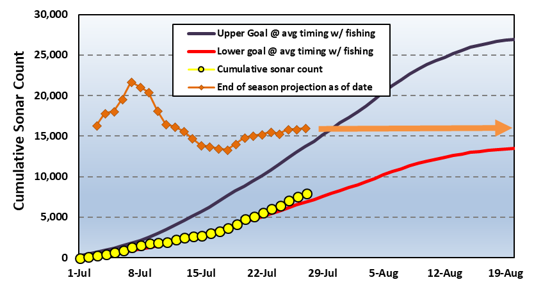 On Friday, July 27, 16,043 sockeye were counted past the Kenai sonar, for a total of 399,254. Kenai sockeye are at the normal 65 percent in the run and end of season projections are declining in spite of fishery closures. It is now a little more than 300,000 behind schedule to meet the lower goal of 900,000 fish. 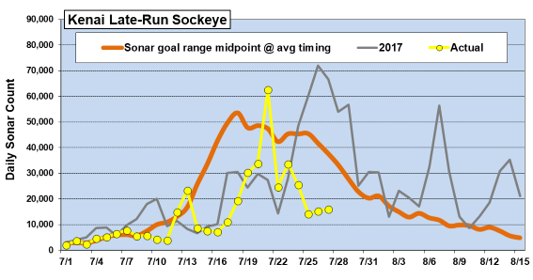 It is unlikely that the inriver goal will be achieved unless run timing is very late. One potential promising sign in yesterday’s Off Shore Test Fishery – the first triple digit (108) count of the year. See third graphic.

Numbers are currently on pace for potentially the lowest Kenai sockeye run since 1.8 million in 2000. This week ADFG downgraded the official sockeye run size projection to under 2.3 million (the preseason forecast of 2.5 million and the average is about 3.5 million).

Very low sockeye counts to date is the primary factor that motivated ADFG to close the Kenai River personal use fishery early and reduce the daily bag limit for sockeye to one fish, both starting Monday, July 30. This is proving to be a disastrous year in Cook Inlet for all fisheries.