Through Thursday, Aug 2, 10,855 large kings have been counted at the sonar at the normal 67 percent point in the run. After a slow start, numbers appear to be following a normal run timing. 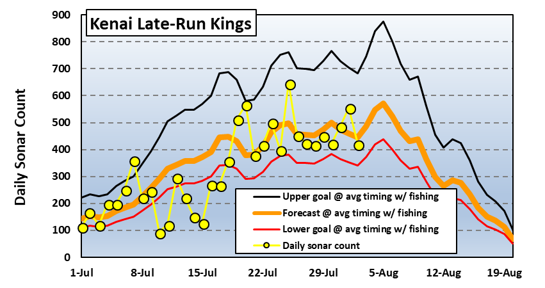 At normal run timing, escapement projects to be around 17,000 which is comfortably above the 13,500 minimum goal. Restrictions and closures of commercial, personal use and sport fisheries have been key to meeting the minimum goal this year. Normal fisheries would have produced escapements below goal levels. Projections have been relatively consistent over the last couple weeks and are not likely to change substantially as the run winds down. Numbers are on track for a total run size of perhaps 18,000 large fish (plus or minus). 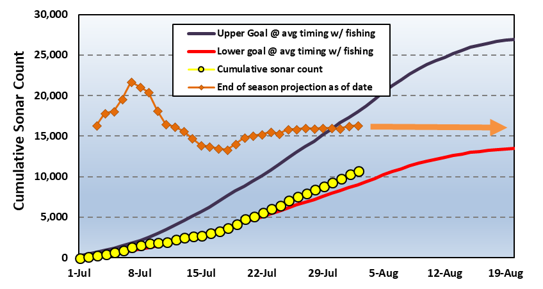 2018 would be the third smallest run on record since numbers were available beginning in 1986 – only 2013 (14,400) and 2014 (13,400) were lower. This continues a trend of low run sizes since 2009, which are the lowest ten years on record. Similarly, low king numbers have been documented in many other areas of Alaska over this same period. After numbers began to rebound from the 2013-2014 disasters, there was hope for a return to the much larger runs of the 1990s and 2000s. However, with this year’s weak return, it appears that the king run may be in extended period of lower returns. Hopefully, these low runs do not represent a new normal in the foreseeable future. 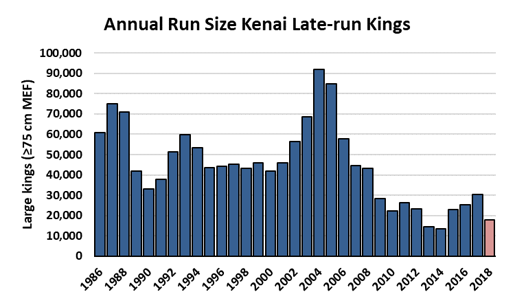 The total run size of Kenai late-run king salmon is of course greater than the number of large fish. Big fish typically comprise around 80 percent of the total run. Big fish are used as an index of total run size and escapement because smaller kings were simply too difficult to count at the sonar mixed in with hundreds of thousands of sockeye. It would a misconception to think that big kings are somehow more important than small kings for the long-term health of this run. All sizes of kings are important for long-term sustainability. All sizes contribute to future returns. Small fish provide an important buffer in numbers of spawners in low run years like this one. All sizes represent the natural genetic and life history diversity which is the engine that makes Alaska salmon so productive. It will be interesting to see what this year’s size composition of kings looks like after all the fish are counted. As will most king runs from Alaska to Kamchatka, the percentage of small late-run Kenai kings has increased over the last couple decades apparently in response to some widespread effect of ocean conditions. However, from year to year large numbers of small fish can predict future returns of large fish. It will be good news for the future if we see a larger percentage of smaller fish in the run this year compared to average.