Counts of late-run Kenai kings during early July are promising. We are ahead of pace to reach a sonar count of 22,500 which is identified in the management plan as a trigger for paired sport and commercial fishery restrictions currently in place. 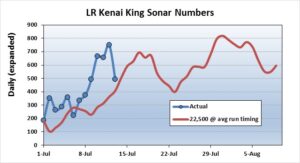 However, projections of run strength from early numbers would be premature. Our confidence is very low in run projections at this point in the season. We just can’t tell the difference between an early run timing and a stronger-than-forecast run. 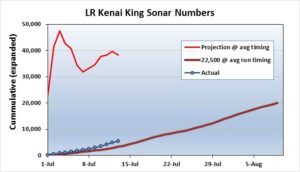 Uncertainty in any king projections from early July data is high because of unknown run timing, only two years of data at the new sonar on which to base projections, expansions of sonar counts of large kings based on very low numbers of smaller kings caught in test nets (only 61 through Monday), and a possible high incidence of small kings in the run which affects productivity of the spawning escapement.

Past experience with kings has shown that projection numbers typically move back toward forecast levels from extreme early projections. The preseason forecast for late-run Kenai kings was 22,115.

King numbers might be used as a rationale by some for more aggressive commercial set net fishing, particularly in the Kasilof section where strong early numbers are threatening the upper end of the Kasilof sockeye BEG.

The Kasilof sockeye run is at the normal halfway point and appears well on track to come in close to the forecast of 1.1 million. Strong early numbers suggest that this run may be early-timed.

Kasilof escapement is tracking to substantially exceed the BEG of 160 to 340 thousand but could still come in around the top of the OEG (390,000) if the run is early timed. 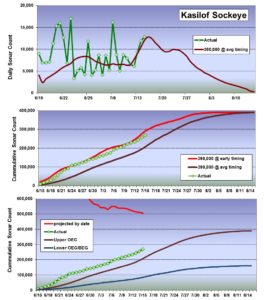 It is still too early to know what the Kenai sockeye run looks like. We are only at the 15% mark in the run timing. Low offshore test net indices and drift gillnet harvests suggest a late run timing (unless the run is substantially less than the 3.6 million forecast).

Kenai sockeye escapements are in line with inriver goals consistent for the forecast run size but projections will fall off if soft sonar counts continue through the weekend. The low Kenai sockeye numbers will help buy time for considering a formal upgrade in the Kenai king projections. However, the risk of limited commercial fishing in the interim is they might miss the peak if the sockeye show up all at once. 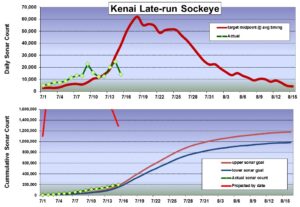 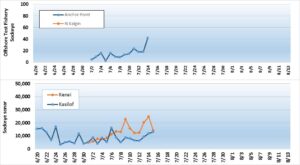 Commercial sockeye harvest has been good on the Kasilof setnet beaches but relatively poor in drift gillnet and Kenai setnet fisheries. Sockeye numbers in the offshore test fishery and the commercial harvest are only just now beginning to build.

The Kasilof setnet fishery has been active in response to large sockeye escapements in the Kasilof River to date. With constraints on set net emergency order time beginning July 1 (due to Kenai king sportfishing no-bait restrictions), the terminal commercial fishery in the Kasilof River Special Harvest Area has been liberally employed over the last two weeks.

Substantial numbers of kings have been taken in the setnet fishery in the last 3 area-wide openers – 500 to 700 per day. King harvest numbers picked up considerably on Thursday July 9 from earlier in the season and relative to last year. It is unclear to what degree this increase is due to an increase in king abundance versus additional retention and reporting of king catch.

To date, management has adhered religiously to established management plans.

Wednesday’s 12 hour opener of the Kasilof setnet fishery is interesting. With other openings through Thursday, this uses 34 of the authorized 36 hours per week. The emergency order suggested that this opener might have been in lieu of use of the Kasilof Special Harvest Area. If an additional opener is allowed on Saturday after the obligatory 36-hour window, then this would exceed the 36-hour limit specified in the management plan. The justification for such and opener would be continuing high Kasilof sockeye escapements and strong early indications of Kenai late-run king numbers in the sonar counts and the commercial harvest. Typically announcements of Saturday setnet openers come sometime late Friday.

Shallow net regulations were employed where set gillnet fishermen who own and operate two CFEC set gillnet permits. These fisherman may operate up to 210 fathoms of gear, except that no more than 105 fathoms may exceed 29 meshes in depth.

The Anchor point drift net section was opened during the regular period on July 16. This area is authorized for use beginning July 16 according the drift gillnet fishery management plan. This area was added to the plan at the last Board of Fisheries meeting to address concerns by Homer area fisherman of the long distance required to travel to fish the expanded when drift area 1 south of Kalgin Island was closed.

Because regular Monday and Thursday set net fishing periods were suspended this year due to the low king run, the Tuesday July 14 set net opener was decoupled from the Monday regular drift opener. Commercial fishery managers have been historically reluctant to decouple these openers due to fisherman objections despite potential benefits to processors and fish quality of spreading catches throughout the week.