In the North Pacific Ocean, the overall number of pink salmon impacts the size and numbers of other salmon, including coho, Chinook and steelhead salmon.

Across Alaska, king salmon populations are at historic low numbers. The Yukon, Kuskokwim, Cook Inlet, Kodiak, Copper River and Southeast Alaska king salmon fisheries for subsistence, sport, personal use and commercial users have been restricted and or closed in the past two decades. King salmon are iconic in Alaska, and these restrictions and closures have had negative impacts on many people statewide.

The Alaska Department of Fish and Game (ADFG) scientific reports point to an issue in the ocean environment as the primary cause of this decline.

In a 2016 report by Leon Shaul and Harold Geiger of the ADFG Division of Commercial Fisheries in the North Pacific Anadromous Fish Commission Bulletin No. 6 (pages 329-347) entitled Effects of Climate and Competition for Offshore Prey on Growth, Survival, and Reproductive Potential of Coho Salmon in Southeast Alaska, pink salmon are recognized as a keystone predator in the salmon food chain of the North Pacific Ocean.

Pinks are a keystone predator.

A keystone predator plays a critical role in maintaining the structure of an ecological community, affecting many other organisms in an ecosystem and helping to determine the types and numbers of various other species in the community. In the Pacific salmon food chain, the number of pink salmon in the ocean on any given year will impact the growth and marine survival of other salmon species. 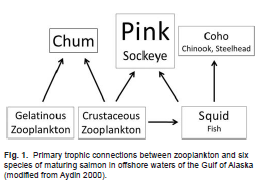 Figure 1 from the ADFG report outlines the food connections between six salmonids in the North Pacific – pinks, chums, sockeye, coho, Chinook and steelhead.

Pink salmon typically have a two-year life cycle and are the fastest growth rates of the Pacific salmon. They have an alternating abundance cycle known as an even-year, odd-year pattern, where one year has higher numbers, and the next year lower numbers, and then the cycle repeats itself.

The authors point out that as pink salmon numbers in the North Pacific Ocean increase, there are offsetting losses for those fish that are feeding on squid, including coho, Chinook and steelhead salmon that occur in far lower abundances than pink salmon. 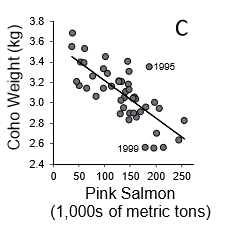 The results for their study on a SE Alaska coho salmon population show that the trade-offs not only include smaller size fish, but also a lower rate of marine survival and therefore a decrease in the overall number of coho salmon. Figure 5 of the report shows the inverse relationship between coho salmon weight and 1,000s metric tons of pink salmon harvest in commercial fisheries. The higher the pink salmon harvest, the less weight for coho salmon.

Take Action and Comment to the Alaska Board of Fisheries.