REEL NEWS FROM ALASKA and OUTSIDE

The Alaska Department of Fish and Game reminds 2018 Cook Inlet Personal Use permit holders that the deadline to return the permit to ADFG is Wednesday, August 15. These fisheries include the Kenai, Kasilof and Fish Creek dipnet fisheries, and the Kasilof gillnet fishery. Participants can report online at the ADFG webpage, or return in person to a local ADFG office or return by mail.

Silver Fishing heating up on the Kenai 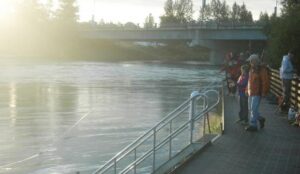 Peninsula Clarion photo on the Classic Fishwalk near the Soldotna Bridge.

Peninsula Clarion highlights silver fishing on the Classic Fishwalk at the Soldotna Bridge.

Radio Kenai discusses the closure of the federal subsistence gillnet fishery for sockeye salmon, in an effort to conserve the stock for spawning. Commercial, sport and personal use fisheries have been closed to conserve Kenai River sockeye.

KTUU covers the story of troopers seizing 16 tons of salmon they say were caught illegally by a handful of vessels south of Homer. 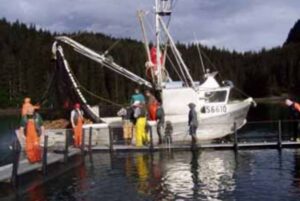 Craig Medred reports that the four commercial fishermen ticketed believe that they were framed on trumped-up charges, due to their association as board members on the Cook Inlet Aquaculture Association and the Cook Inlet Hatchery Regional Planning Team.

Schedule of events for Friday, August 10 across Alaska to celebrate the third annual Wild Salmon Day.

One of the ways to celebrate Alaska Wild Salmon Day is to put the wild back in wild salmon.

Did you know that more than one-third of “wild” salmon harvests in Alaska are hatchery-origin fish? Did you know that salmon have been decreasing in size across Alaska, despite there being more salmon in the ocean than any other period in the historical past? Did you know that hatchery fish compete in the “wild” ocean for food with wild salmon?

The American Fishery Society reports that new research quantifies record-setting salmon abundance in the North Pacific Ocean. “While it is good that abundance of Sockeye, Chum, and Pink salmon is high, there is growing evidence that this high abundance, especially Pink Salmon, is impacting the offshore ecosystem of the North Pacific and Bering Sea,” said lead researcher Dr. Greg Ruggerone. “This impact may be contributing to the decline of higher trophic species of salmon such as Chinook Salmon in Alaska. Hatchery salmon are exceptionally abundant now and contribute to this impact.”

Highlights from the research include:

• There are more Pacific salmon now than ever before since comprehensive statistics began to be collected in 1925 (i.e., catch plus spawning escapement). However, Chinook and Coho salmon and steelhead trout are depressed throughout much of their range, representing only 4% of total salmon catch.
• Numbers of Pink Salmon, Chum Salmon and Sockeye Salmon averaged 721 million salmon each year during 2005–2015 or approximately 36% more salmon than in the previous peak in the late 1930s.
• Pink Salmon represent nearly 70% by numbers of all three species.
• High overall salmon abundances primarily reflect high numbers of natural-origin and hatchery salmon in northern regions where habitat is less degraded and warming ocean conditions have been generally favorable for Pink, Chum, and Sockeye salmon.
• Hatchery salmon now constitute ~40% of the total biomass of adult and immature salmon in the ocean, largely because of Chum Salmon that spend more years at sea.
• Major hatchery production for these three species occurs in Alaska (Prince William Sound, Southeast Alaska), the Sakhalin and Kuril Islands (Russia), and Japan. In Alaska, up to 48% of total commercial salmon harvest is from hatchery salmon according to the Alaska Department of Fish and Game.
• Salmon migrate 1000s of kilometers at sea and compete for food with salmon from both Asia and North America. High salmon abundances can lead to reduced body size and survival of salmon and lower survival of seabirds. The ocean carrying capacity for Pacific salmon may have been reached in recent decades. Research is needed to better understand the impacts of high salmon abundance on the offshore marine ecosystem, including depleted wild species such as Chinook and Coho salmon and steelhead trout, and some populations of Sockeye and Chum salmon.
• The authors recommend the following changes in salmon management: 1) mark or tag all hatchery salmon so they can be identified after release, 2) estimate hatchery- and natural-origin salmon in catches and escapement, and 3) maintain this information in publicly accessible databases.

Reel News at the National Level

Via Yamaha Outboards, video story about Freeman Boatworks and the American Dream.