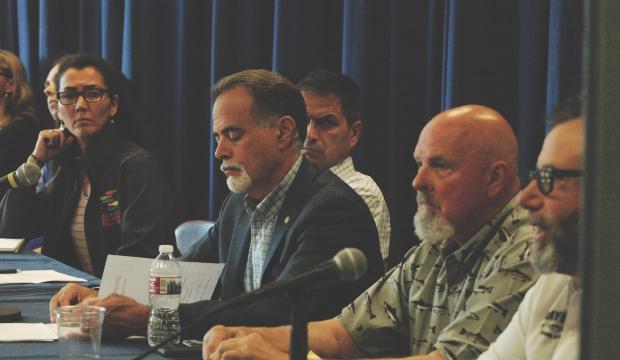 Click to view the video of the 2018 Classic Roundtable, the agenda, and the biographies of the keynote speaker and panelists.

With participants from a broad swathe of the salmon spectrum, the Kenai River Sportfishing Association’s Classic Roundtable discussion Wednesday focused on new research and management tools to preserve troubled salmon returns in the state.

Part of the Soldotna-based sportfishing association’s annual Classic event, the roundtable discussions invite experts and stakeholders to address various issues related to fishing and fisheries management. This year, the panelists focused on science related to recent changes in salmon size and age, the cultural and economic impacts of the declines and market-based strategies to change salmon fishery allocation.

Presiding as the keynote speaker was National Marine Fisheries Service Assistant Administrator Chris Oliver, who previously lived in Alaska for 27 years and served as the executive director of the North Pacific Fishery Management Council. Since taking the role as the head of the National Marine Fisheries Service, which among other functions regulates fisheries in federal waters and enforcing the Marine Mammal Protection Act, he said he’s made a few adjustments to overall identified goals and gotten a broad perspective on issues in fisheries nationwide.

“You’ve seen over the past year a number of executive orders from the president that are specifically aimed at cutting red tape and reducing regulatory burden,” he said. “We’ve been aggressively pursuing that agenda and have made what I think are pretty good strides already.”

One of those adjustments is to encourage aquaculture. There’s some room for additional harvest on wild stocks of fish nationally, but the National Oceanic and Atmospheric Administration wants to find ways to encourage people to pursue successful aquaculture, Oliver said.

“We don’t have a lot of headroom on our wild capture federal fisheries, but the growing population of the world and thea mount of coastline that we have, promoting marine aquaculture is a huge initiative of this administration,” he said. “I know in Alaska, particularly with finfish aquaculture, that’s not always a welcome prospect, but nobody’s going to be forcing anybody to undertake marine aquaculture.”

Aquaculture is a major player in Alaska’s seafood economy now, with salmon hatcheries spaced along the Gulf of Alaska from Kodiak to Ketchikan, and no small source of controversy. The Prince William Sound and Lower Cook Inlet hatcheries in particular have come under fire in the last few years as members of the public ask whether the populations of pink salmon they produce are harming wild stock sustainability.

Research indicates that the North Pacific Ocean has more salmon in it now than at any point in the last 100 years, with about 40 percent of it coming from hatcheries, said Dr. Peter Rand, a researcher with the Prince William Sound Science Center who is leading a research project on the interactions of ocean climate and at-sea competition on Alaskan salmon.

The research he is leading, funded through the State of Alaska’s Salmon and People project, examines specifically the marine phase of the salmon life cycle, focusing on pink salmon. Prince William Sound’s hatcheries produce the most pink salmon of any region, prompting questions of how their presence affects the wild stocks in those streams and how increasing the production impacts the ocean ecology of the Gulf of Alaska. One thing they’re seeing so far is large changes in the food web — particularly with plankton — in the odd and even years with the pink salmon fluctuations.

“One of the key things… would be the term ‘interaction,”’ he said. “We’re particularly interested in interacting. Our hypothesis is that in years of relatively warm water, particularly in the West Coast, the lower range of Pacific salmon, that translates into poorer survival of young salmon entering the ocean. We think that when you add density dependence to that, these stocks will become even more vulnerable.”

The Kenai River Sportfishing Association was one of more than a dozen stakeholder groups that petitioned the state Board of Fisheries earlier this year to stop a Valdez-area hatchery from increasing its egg take to thus increase its salmon production. The board denied the petition and allowed the egg take to proceed, but some board members said they understood the groups’ concerns about the effect of increasing salmon production on the Gulf of Alaska and thus other salmon.

The research Rand’s group is doing isn’t creating a direct link between the number of pink salmon and the survival or size of other salmon, but it’s true that as the number of hatchery salmon released into the North Pacific has increased, Alaskans have noted a decline in the size of returning salmon. Another research project coordinated through the State of Alaska’s Salmon and People project is investigating the cause of that decline, and though the decline is real, there’s “no smoking gun,” said researcher Krista Oke.

That decline in size has had serious implications for subsistence fishermen on the Kuskokwim River, said Mary Peltola, a fellow in the Alaska Humanities Forum’s Alaska Salmon Fellows program. The river has historically supported a commercial fishery as well as a subsistence harvest of more than 80,000 king salmon, which the rural residents depend on for food in the winter months. With the smaller size and restrictions, it’s negatively impacted the communities.

“We’re talking about a group of people who have a lot of food insecurity issues anyway and chinook (salmon) was really a cornerstone of our subsistence larder,” she said. “Most of our freezers had a huge portion of it devoted to our king salmon dried fish.”

She and the two other speakers from the Salmon Fellows program — Kenai River Sportfishing Association Executive Director Ricky Gease and Tanana Chiefs Conference director of hunting and fishing task force Ben Stevens — all spoke about the economic and social impacts of declining king salmon runs in their areas. Gease cited the closures of sportfishing-related businesses on the peninsula and the restricted commercial fishing in Cook Inlet. Stevens said the declining Yukon River salmon runs that led to closures have contributed to social “chaos” in the rural villages that have circulated around salmon harvest for generations.

Partly in response to salmon declines, a group of Cook Inlet east side setnet fishermen has been working with Kenai River Sportfishing Association and the Legislature to pitch the idea of a permit buyback in the fishery — essentially, a voluntary program for setnetters to be bought out of their permits to reduce the number of nets in the water by about 45 percent.

Sen. Peter Micciche (R-Soldotna), sponsored a bill (Senate Bill 135) during the last legislative session that would create a buyback program, though it wouldn’t appropriate funds. Micciche said he sponsored it at the request of some of the setnetters after several years of discussion and would craft it so they would have the final vote on the buyback in the end. With no state funding planned for the buyback, the supporters are looking to federal and private funds to support the estimated $50–60 million total cost, at about $260,000 per permit.

Similar market-based solutions — as opposed to regulatory restrictions — have been implemented in other fisheries. The North Pacific Fishery Management Council is in the process of implementing a recreational quota purchasing system for the halibut charter fleet, which sets up a willing buyer-seller model for charter.

In the end, reducing the number of permits would increase the profitability of the fishery for those who keep fishing and reduce conflict, which makes it a win-win, Micciche said.

“I really ask people to be open to the discussion,” he said. “The continued battle where we all mutually lose ground on the resource does not seem to be working, I most of us will agree.”

No hearings were scheduled after the bill was introduced last session. Micciche said at the time the bill is a draft and won’t be scheduled for committee hearings until the stakeholders have had a chance to review it and offer comments.

In answer to a question, Gease said the Kenai River Sportfishing Association board has worked on the permit buyback plan with the fishermen and “will help in whatever way we can.”

Are you a member?

Memberships are free! Once a member always a member. Together we can make a difference.